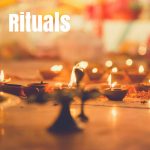 This stream formally began in 2011 with the objective of providing explanations into the various Jain rituals that take place throughout the year. Young Jains have run a number of workshops including:

Paryushan is the sacred annual period of fasting, forgiveness and self-introspection. During this spiritual time Jains observe harmony with the ...
Read More

Diwali is the celebration of Tirthankar Mahavir Bhagwan’s Moksha Kalyanak. Bhagwan Mahavir relinquished his mortal coil and proceeded towards the place ...
Read More

An area to focus on in the rituals stream is the meaning behind different aspects of darshan as well as the Chaityavandan sutras and what they mean.

For example in the Namuthunam (shakrastava) sutra the virtues of the Tirthankars (Arihants who have conquered all inner enemies) are mentioned and they are bowed down to in an extremely poetic manner.

Another poetic stanza – Tinnanam, Taryanam, comes from the stem Tarvu which means to swim. It is a metaphore relaying the cycle of life death rebirth and sansaar to an ocean. One can drown in this ocean because of negative thoughts and the inner enemies that sap our strength. These inner enemies include; anger, greed, ego, and deceit among others like jealousy, lust, worry etc. Tirthankars have not only swum this ocean to the other side (tinnanam) but are also helping others to swim across also through their teachings (taryanam).

Here is an in depth breakdown of the Namuthunam sutra.

In the future, on this page we will discuss the meanings of some other aspects of rituals such as Samayik including stories as well as the depth behind some of the meanings. As a taster for a future written piece on this site is a link to a beautifully sung version of the logassa sutra.