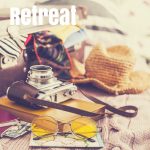 The YJ retreat is one of the highlights of the YJ calendar and not to be missed. Spend a weekend living spiritually with like-minded souls in the English countryside. Activities include Jain Dharma workshops, spiritual discussions, walks in the surrounding countryside, yoga, evening games, and cooking lovely Jain Vegan food throughout the weekend.

A retreat (shibir) is a very rare opportunity to live spiritually with like-minded souls; to not be surrounded by technology; to live in total harmony with each other and our surroundings; to live by maitri (friendship), karuna (compassion), pramod (appreciation) and madhyastha (equanimity).

Below you will find summaries of recent retreats.

The annual Young Jains retreat took place from Friday 13 May to Sunday 16 May 2016 at the Marist Centre in Gloucestershire. Fifteen members of the Young Jains community participated in the fun weekend in the beautiful English countryside brimming with sunshine, socials and spiritual discussions.

After a short ice breaker session, the weekend started with a personal development exercise called the ‘Wheel of life’ run by YJ President Anuja Shah. Participants were asked to spend some time thinking about the different dimensions in their life, and to give themselves a score out of 10 for each of these dimensions, reflecting where they are today compared to where they’d like to be.

After the workshop, we enjoyed a dinner of thepla, corn curry, vegan kadhi and rice, followed by a dessert of apple crumble and vegan custard while playing another ice-breaker game called “how long is a piece of string”.

After early morning yoga run by Dakshaben, Saturday kicked off with a workshop on gratitude run by Sagar and Anuja. Participants were asked to think about what gratitude is, and the things in life that they feel genuinely grateful. Many noted how they felt grateful for their good health, for the support they received from their families, for the education they had received.

The group then discussed how gratitude might potentially conflict with the Jain path to the extent that it might cultivate attachment to temporary human body. The group agreed that practising gratitude even for elements of human body could be helpful to the extent it helps avoid less virtuous bodily thoughts, such as ego and greed. Nevertheless, it was accepted that from a spiritual perspective it might be better to cultivate gratitude for things such as a human birth and opportunities for spiritual development than for bodily attachments.

The workshop then moved on to exploring the evidence on benefits of gratitude and ways to put gratitude into practice, drawing research by Professor Robert Emmons. The evidence suggest that cultivating gratitude through exercises like journaling can improve psychological (e.g. increase positive emotions such as joy and reduce feelings of stress and anxiety), physical (e.g. improved sleep, increased exercise and reduced blood pressure), and social (e.g. improved relationships) wellbeing.

After lunch, the group set off for a walk through the beautiful Gloucestershire countryside, passing through Woodchester Mansion and around Brick Kiln Pond. While walking, we were asked to focus conversations on inspiring thoughts, quotes, books and films, and to spend 5 minutes walking mindfully in silence.

After returning from the walk, we enjoyed a delicious thai-style curry with butternut squash and tofu for dinner. We then enjoyed a quiz organised by Milan, complete with smart-phone powered buzzers. Questions included both general knowledge and Jain-dharma focused questions. Hiten also performed a rap, inspired by the workshop on Gratitude in the morning.

Several participants noted how they liked a beautiful analogy between honeybees and Jain monks. Just like honeybees fly from flower to flower, collecting only a tiny amount of nectar from each one, Jain monks go from home to home, collecting so little food on each visit that no householder could go hungry. And just how the worker bees help the flowers through pollination and transform the nectar into honey to nourish their communities, Jain monks help transform the lives of the householders they visit by showing them the path to liberation and helping them lead a more compassionate life.

Participants spent the second half of Sunday morning trying to use Jain principles to explore a modern issue in bioethics: abortion. Sagar introduced the session, citing analysis of the Indian census by Jinendra Ranka (previously published in Jain Spirit Magazine) suggesting that rates of female foeticide may be higher among Jains than among other communities in India.

Participants then explored questions relevant to understanding the Jain perspective on abortion. These included the point at which a embryo/foetus has soul; whether sensory development affects the level of violence in termination; whether raising a child under difficult circumstances constitutes violence to the child or the mother from a Jain perspective; and whether Jainism ever advocates attempting to use violence in the present to help avoid violence in the future. Everyone found the discussion interesting, and many felt that they learnt something new.

The weekend ended with a feedback session, where everyone shared something that they learned and offered some thoughts on how the experience could be improved. Many noted how they thoroughly enjoyed the weekend and how they wanted to try and come again in future years.

On February 22-24 2013, 40 people came to this spectacular weekend retreat to the Marist Centre in Gloucestershire.

After lunch on Friday, we started the weekend by going for a walk and we reflected on four questions: a book that inspired you, a stavan or piece of music that moves you, a quote/moto to live by, and a turning point in your life. In the evening on Friday, we all lit a candle, signifying the atma within.

Saturday started off with yoga, some stretches and movements of the body, to remove any tension so we could focus our energy and mind on the rest of the day. Following breakfast, we started the first session of the day, where we discussed the sathiyo and its meaning and we delved deeper into the path of purification. We gained an understanding of vivek bhudhi – discriminative thought power. By using vivek bhudhi, we can understand the true nature of reality and we can reduce our attachments, raag/dwesh and kashays. Ultimately vivek bhudhi allows one to discriminate between soul and body.

Following lunch, we went for a walk in Westonbirt Arboretum, which has an internationally renowned tree collection and heritage landscape. We reflected on the question: “Does everything happen to me because of my karma?” The walk was followed by a creative visualisation session. Following dinner we had a storytelling session. Throughout the weekend we all cooked lovely Jain Vegan meals (vegetable couscous, spaghetti with tofu, Mexican burritos, vegetable ratatouille with rice). I cannot forget the fabulous deserts we had over the weekend. 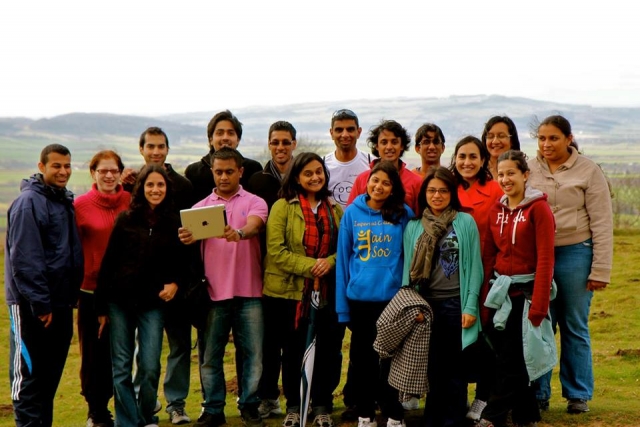 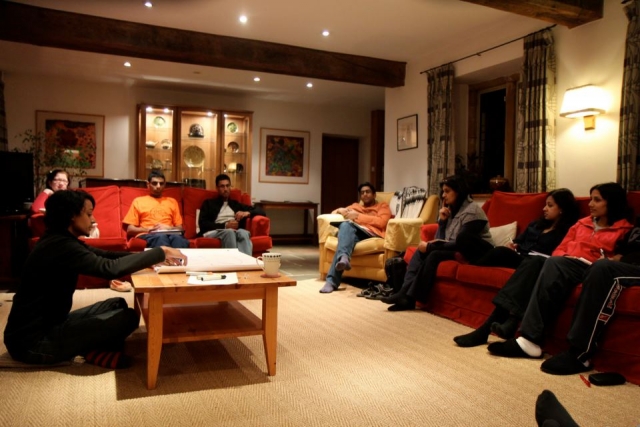 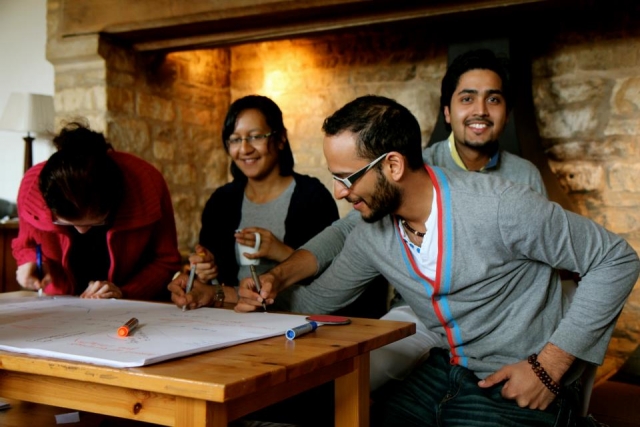 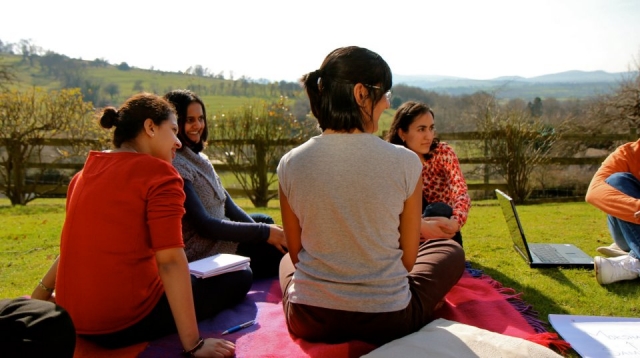 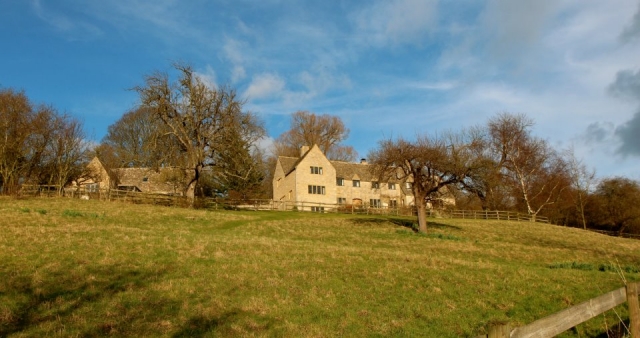 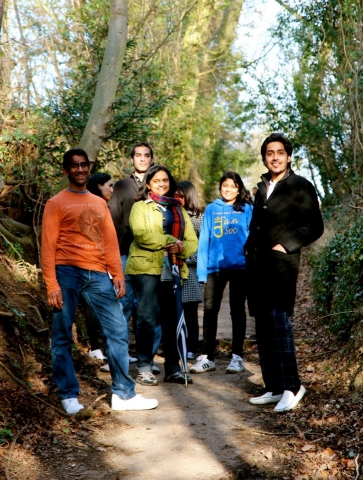 Personal perspectives on the Retreat 2016:

“This was my first Young Jains retreat and what an experience it was. It was great to meet so many new people and get to know existing friends better. The whole weekend was fun and entertaining with a variety of activities. The workshop sessions were insightful and educational. They were led really well and helped to gain more knowledge about Jainism, as well as oneself and of other people. The wheel of life was particularly great as it helped illustrate things that are important to me in a visual diagram. Outside of workshops, the social element was extremely good. There were plenty of chances to chat and get to know people whether that was in ad-hoc conversation or while preparing meals for the rest of the group. The whole weekend was a huge enjoyable experience and the awesome weather that allowed us to go for a nice country walk was the icing on the cake. I’ll definitely be coming back next year.”

“This was my first retreat with Young Jains and throughout this weekend I became closer to the team as a family. It was an unforgettable experience which I found to be very powerful. The whole retreat was fun and exciting especially the group debates, where interesting topics were discussed for example gratitude. There were many enjoyable games which were full of jokes and laughter. Every moment was amazing and I learnt something new every day.”

In early September 2012, YJ organised its first trip to the derasar in Antwerp, Belgium. Throughout the weekend, we focused on the four pious qualities of maitri (friendship), pramod (appreciation), karuna (compassion) and madhyastha (equanimity). Through a set of workshops, we discovered the importance of these qualities and why they are referred to as the seeds of religion. We used the acronym FACE to remind us of the four descriptions and ‘to take our FACE with us wherever we go.’