During some of the Belgium sightseeing we were asked to perform a little task. That was to observe our actions and those of others and note down any examples of the FACE qualities. These included asking for, and gratefully receiving directions; vehicles stopping to let our older companions cross the road and appreciating the musical talents of local buskers.

The rest of the discussions centred on these observations and a particular story on Mahavir Bhagwan encounter with Chandrakaushik nag.

Once during Mahavir Bhagwan’s last life he went through a village and into a neighbouring forest to meditate. An evil and vicious snake, called Chandrakaushik, ruled this forest. As the inhabitants of the village learned where Mahavir was going they pleaded with him to go elsewhere warning him of the impending dangers. Mahavir however, did not change his course; he continued into the forest and began his meditation.

When Chandrakaushik found that someone had invaded his forest he acted with rage and hissed violently at Mahavir in attempt to scare him off. Mahavir Bhagwan was not disturbed at all and he continued blissfully in his meditation. With no reaction seen the anger grew within Chandrakaushik and he proceeded to bite Mahavir on his toe. Again, Mahavir remained undisturbed. Chandrakaushik was in shock, he could not understand how his actions had not affected this person. 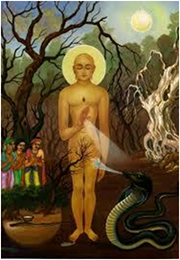 He became very still and stopped all action. The villagers soon learned that Chandrakaushik was no longer a threat and they came into the forest to find him. When they saw Chandrakaushik completely still they began stoning him. Chandrakaushik in spite of the pain remained fixed where he lay and eventually passed away to be born into the heavens.

On the topic of appreciation, we discussed what qualities we appreciate and how the appreciation of them helps us on our path to moksha.

The key words and themes that we associated with it were:

The discussions revolved around the satisfaction we obtain by observing these qualities in other people, which reflect the qualities of the soul. This happiness or bliss we experience is the true sense of pramod.

Some of the examples that we drew from the previous day’s activities could have been of this nature. Strangers were helping us, not to be rewarded but for the sheer good deed of helping, a sign of maitri. Then we experience a sense of happiness in seeing this universal friendship in them.

In Mahavir Bhagwan’s encounter, we can see pramod in both characters. Chandrakaushik, after awakening to see his true nature, would have had immense appreciation for the qualities of soul, all of which Mahavir exhibited. Mahavir could see the potential Chandrakaushik had for spiritual progress even in the life of a snake.

We also observed that acts of pooja and even reciting the Navkar Mantra are forms of pramod, when done with the right mindset. We are praising the qualities of the Tirthankaras and all of the panch parmeshti (the five entities we praise in the Navkar Mantra prayer). This further highlights the true universal nature of maitri, in that souls we are praising are not of this world and we will never have worldly knowledge of them, yet that sense of pramod is still there.

This sheer sense of joy of seeing the qualities in others helps us to combat our own ego; as such, we should try to avoid the thinking highly of our own qualities.